Well, all good things must come to an end. I’m pointing my purple sneakers south and heading back to Virginia.

A few final musings before I go:

– Technology appears to be playing an increasing role in Alzheimer’s…not just the detection and diagnosis, as you might imagine, but even in care and support. I told you about the session I attended the other day (Monday? Who knows any more??) about technology. In addition to the use of computers to increase the engagement of individuals with Alzheimer’s, I heard how telemedicine is being used to make routine follow-up testing and caregiver check-ins more convenient for people in rural/remote areas. And in the Exhibit Hall there are several companies touting various technological offerings…my favorite being the soft, furry baby seal-like “creatures” that respond to being petted and make soft sounds and move their heads; they are used as comfort objects for people in later stages. This morning as I was getting dressed I saw on the local news one of the robots that was developed to detect changes in voice and language patterns to possibly identify signs of early cognitive changes. I know that not all technology being developed will make a difference for people with Alzheimer’s and their families, but it is another piece of the large puzzle.

– I met a gentleman here who has been diagnosed with dementia. He is here with his wife. She was talking to some of us at the Alzheimer’s Association booth, and she told us that he says joining TrialMatch® was the best thing that has happened since he was diagnosed, because he is now enrolled in a trial. He was depressed after his diagnosis, but now he feels like he is doing something to make a difference. That’s powerful.

I joined TrialMatch®a few months ago, and I have so far participated in one trial which uses testing results from healthy volunteers and those with a diagnosis of MCI, hoping to identify markers that can be used for earlier diagnosis. I encourage all Alzheimer’s Association staff to at least investigate the website and read about trials and what is involved. You are under no obligation to participate in any trials, but it is an easy way to find out whether there are trials for which you qualify. Go to http://www.alz.org/research/clinical_trials/find_clinical_trials_trialmatch.asp

It has been my genuine delight to be your “eyes and ears” at the 2016 AAIC. I hope if you have not attended AAIC before you will consider it. London in 2017! The experience has given me a much better appreciation for the science aspect of the Association.

Most of all, the experience has given me renewed hope and optimism for scientific discoveries that are going to continue to improve the detection, diagnosis, treatment, and, ultimately, find the cure for Alzheimer’s Disease and related dementias. Believe me when I say there are many brilliant people at work across the globe working toward these goals, and the Alzheimer’s Association is playing a leading role in making it happen!

Thanks to the Alzheimer’s Association for the privilege of being the Staff Liaison for this year’s conference. Thanks to all of the National staff who made me feel like “one of the team.”

Just a few more photos from my album… 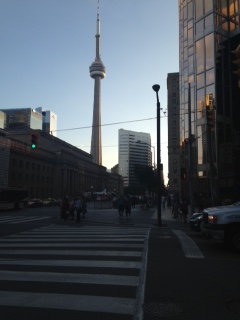 Leaving Toronto going to the airport

Leaving Toronto going to the airport

The Alzheimer’s Association International Conference®2016 (AAIC®) is the world’s largest forum for the dementia research community. Researchers, clinicians, care providers and students from over 70 countries gather at AAIC to network and discuss the latest dementia study results, theories and discoveries.

AAIC 2016 will be held in Toronto, Canada at the Metro Toronto Convention Centre and will feature more than 90 sessions, 1,700 posters and 475 presentations.